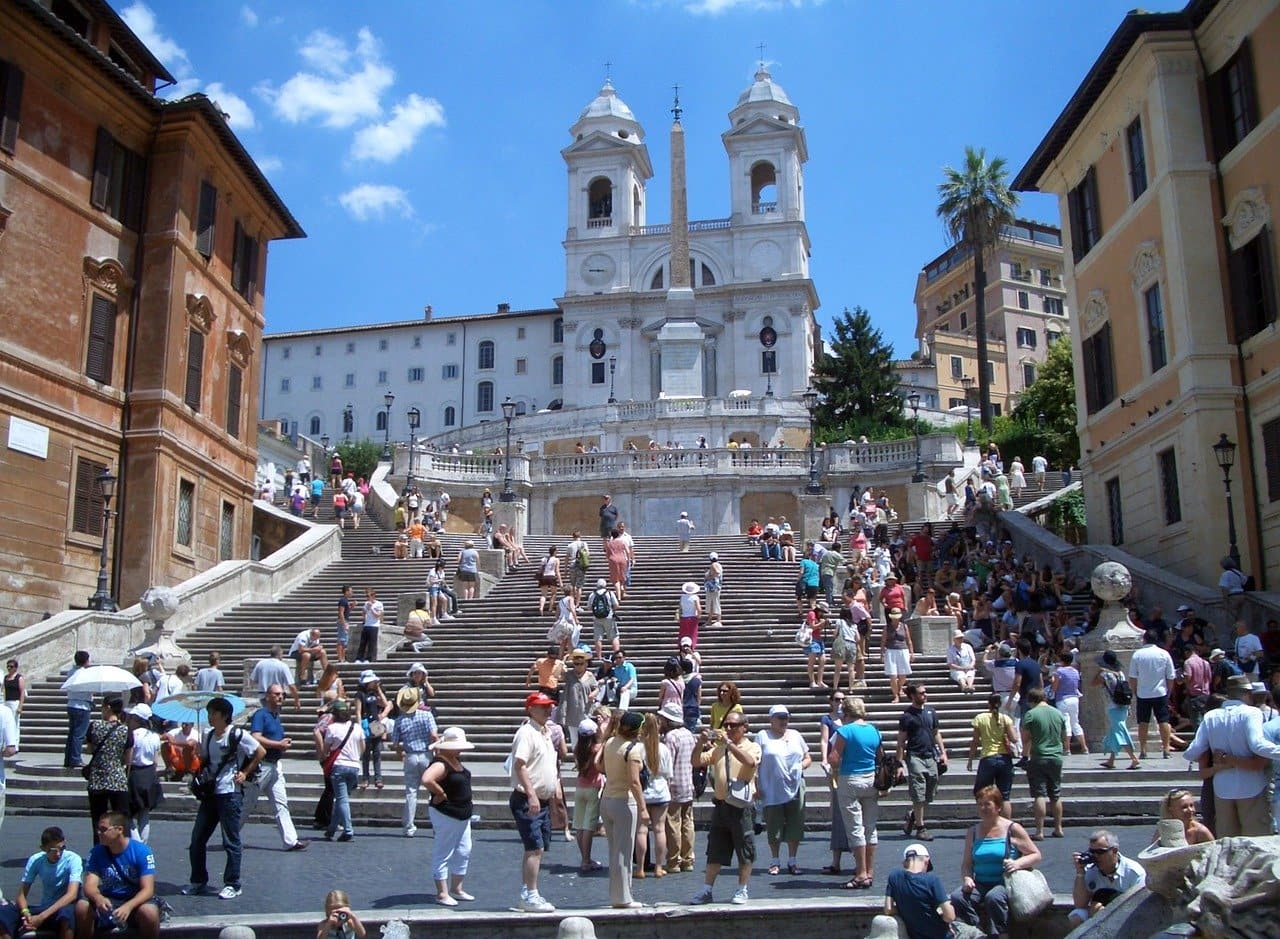 Finding the best months to travel to Rome in 2020 is easy: avoid the summer and go in the shoulder season. Rome is at its best in May, September and October with great weather and smaller crowds. Crowds are biggest from June to August and the weather is cold and wet from November to February. You can find our month to month advise below.

Rome is one of Europe’s most popular tourist destinations. The city’s history, beauty and diversity attract millions of tourists year on year. With the Colosseum, Spanish Steps and the Vatican, the city has something for everyone. Rome is busy throughout the year but it gets extremely busy in the hot summer months July and August. During these two months European’s tourism season peaks while cruise ship arrivals in nearby located Civitavecchia will cause a daily stream of tour groups and day trippers.

At Avoid Crowds we look at Rome’s tourism data each day of the year. For this month by month overview we look at the stream of tourists as well as the weather in Rome for each month in 2020. You can find our day to day predictions for the Italian capital here.

Rome is cold but not crowded in January

Crowds in Rome are big during the first days of 2020. Except for this first week January is a good month to visit Rome if you do not like big crowds. With mild winters, Rome can be visited during any month of the year. Looking at the Rome’s climate, it normally rains on 7 days in January with an average maximum temperature of 12 degrees Celsius (53.6 Fahrenheit).

There will be some crowds around New Year’s Day and Epiphany but except for those two days in the early days of 2020, Rome will be quiet. Throughout the rest of the January 2020, expect Rome to be quieter than normal.

The coronavirus (COVID-19) is currently generating headlines across the world. We are now keeping track of all tourist attractions closing down or taking measures.

Tourist attractions closed due to Coronavirus

February brings OK weather to Rome while crowds are low

With similar weather as January, Rome is a good winter destination in Europe. Only 7 rainy days combined with average maximum temperatures of 14 degrees Celsius (57.2 Fahrenheit) make February in Rome a good month for a city trip. Rome is also relatively quiet in February. Expect some increased crowds towards the end of the month as many countries across Europe will have winter school vacations. Check our daily crowd forecast when you plan to travel in the second part of the month.

In March, Rome starts to get busier

Rome slowly starts to get busier in March. With some school vacations on the European continent you should expect the city to get a bit more crowded than during the winter months. Rome will also start to feel the effects of the Mediterranean cruise season picking up. This combination of school vacations and cruise passengers will result in slowly increasing crowds. The weather is also improving quickly with an average maximum temperature of 17 degrees Celsius (62.6 Fahrenheit) and 7 rain days. Overall March is a good month to visit Rome if you want to avoid crowds and enjoy reasonably OK weather.

In April, Rome gets to see its first serious large crowds

Easter in Rome is probably one of the busiest times to travel in the pre-season. Almost the entire European continent will enjoy school vacations while the religious holiday itself is centred around Rome (for many). Easter in Rome is considered as the holy week and attracts huge crowds. Not surprisingly, the Vatican will be one of the most crowded areas in the world around this time.

Outside of Easter, the Italian metropole is now slowly getting busier. Cruise ship traffic is ramping up quickly and the improving weather is attracting lots of tourists to Rome in April. Although you can be unlucky with the weather with 8 rain days, the average maximum temperature has now risen to 19 degrees Celsius (66.2 Fahrenheit).

May is a relatively quiet month in Rome with good weather

In May the craziness of Easter is over. Rome will feel much less crowded in May. Although there are occasional peaks with ever increasing cruise traffic in Civitavecchia, most of Europe is still in school or at work. Towards the end of the month, crowds will pick up in Rome. The weather in Rome in May is good with only 5 rain days and average maximum temperatures of 24 degrees Celsius (75.2 Fahrenheit).

Peak season in Rome lasts from half June to the end of August. Many countries, including Italy, will have school vacations from June onwards. If you want to travel to Rome in June, we advise you to visit the Italian capital early in the month. Plan ahead and make strategic choices. Some days are better than others. Days with lots of cruise activity in Civitavecchia are the worst. You can find the cruise schedule for the port near Rome here. June weather in Rome is fantastic with only 3 rain days and average maximum temperatures of 28 degrees Celsius (82.4 Fahrenheit).

Peak season is in full swing during the hot summer months. Every week of July, Rome will get extremely busy. All European countries will have school holidays. Tourists visiting the Italian capital should expect massive crowds and long lines at most of the city’s well-known attractions. Check our daily crowd predictions to separate good days from (really) bad days. We advise you to plan ahead to make sure you make most of the days in the beautiful city. The weather in Rome in July is great with only 2 rainy days and an average maximum temperature of 31 degrees Celsius (87.8 Fahrenheit). Perhaps that is even too warm for some.

August is the busiest month of the year in Rome. Tourists opting to go to the Italian capital in August should expect long lines and huge crowds. It is best to book your stay ahead of time and plan each day so you know where you want to go. Everything will take longer than during other months. The entire European continent will have school vacations and a religious public holiday makes it especially crowded around August 15. The weather is the same as July, only 2 rain days and average maximum temperatures of 31 degrees Celsius (87.8 Fahrenheit). If you decide to go to Rome in August, plan your days and book tickets ahead of time. For example by buying tickets to skip the line at Rome’s main attractions.

September is a good month to visit Rome but you can be unlucky. Some days are good and some days really are not. Although there are no more European school vacations making things busy, cruise ships still bring in tens of thousands of visitors per day. Check our daily crowd predictor for Rome to find out what days are ruined by a massive influx of cruise passengers. Weather wise, September in Rome is absolutely amazing. The hottest days are behind us while Rome still only experiences 5 rain days and average maximum temperatures of 27 degrees Celsius (80.6 Fahrenheit).

October in Rome does have its wet days but the European travel season has completely calmed down. Expect for some autumn vacations in Northern European countries most kids are in school keeping their parents at bay as well. Keep an eye on cruise ship movements as cruise crowds can still make Rome feel (very) busy. Evenings, when cruise passengers are back on their ships, are very enjoyable when it doesn’t rain. In October, Rome sees an average of 7 rain days and average maximum temperatures of 22 degrees Celsius (71.6 Fahrenheit).

November is Rome’s rainiest month but has little crowds

November is Rome’s wettest month. With an average precipitation of about 115 mm (4.5 inches), you should bring an umbrella. It rains an average of 9 out of 30 days. But November is also the best months to avoid crowds in Rome. Keep an eye on cruise ship movements early in the month as some days can still get busy. Overall, November is a great month to visit Rome as long as you are lucky with the weather. The average maximum temperature in Rome in November is 17 degrees Celsius (62.6 Fahrenheit).

December in Rome gets busier again around Christmas

Christmas is a busy time in Rome. Europeans tend to plan city trips in the build-up to the holidays. Rome is on many people’s wish list and weekends are the best time for people to travel. Fortunately, the bigger cruise ships have now relocated to the Caribbean. That means smaller crowds. December weather in Rome is not great with an average maximum temperature of 13 degrees Celsius (55.4 Fahrenheit) and 8 rain days. Needless to say, Christmas in Rome is busy.

Traveling after COVID-19: choosing a hotel