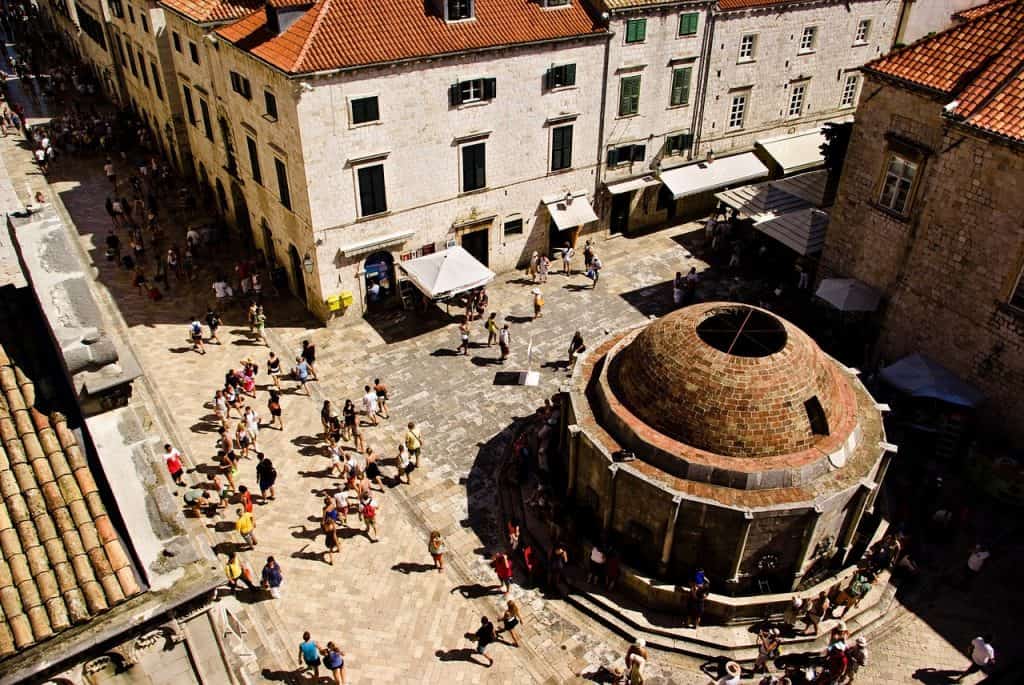 Dubrovnik is one of Croatia’s busiest touristic destinations. Since the breakup of Yugoslavia, the seaside city attracts lots of tourists arriving over land, air and water. Out of 365 days, Dubrovnik welcomes cruise ships on 197 days. In recent years, Dubrovnik has also seen a new kind of visitors as fans of Game of Thrones visit the film locations in and outside the UNESCO World Heritage Site.

Dubrovnik enjoys a Mediterranean climate. You can enjoy great weather throughout many months. From May until October, the average temperature will not drop below 20 degrees Celcius (68 Fahrenheit) while rain is uncommon from May until September.

To predict how busy Dubrovnik will be in any given month, the best thing to do is to look at the sea. Cruise ship arrivals have a massive influence on the town. A single large ship can make the town feel crowded in no time. Local authorities recognize this problem and have taken measures to curb the impact of cruise passengers.

Although the number of fellow tourists in Dubrovnik will be low in January, the weather might not be so great either. You can expect rainy days and cool temperatures. European vacations in the beginning of the month might bring in some tourists but overall it won’t be busy.

The chance of bumping into cruise crowds falls to absolutely 0. There are no cruise ships carrying 500 or more passengers scheduled to arrive in Dubrovnik. Perhaps that has something to do with the weather. It can be rainy, cold and your chance of seeing some sun is small. If you have the possibility to plan your trip last minute, when the weather predictions are good, you might be lucky and have a unique quiet Dubrovnik experience.

Although it can still rain, March will bring slightly more sun and temperatures are also starting to rise. Cruise ships are beginning to arrive but most days will be quiet. If you are lucky with the weather, March is a good time to visit Dubrovnik. Keep an eye out on European school vacations. Check our daily crowd predictions to avoid those school vacations and cruise ships.

Cruise ship arrivals will start to pick up. School vacations and public holidays like Easter, might result in large crowds walking through Dubrovnik’s small streets. The weather is also improving every week. Although there are still chances it might rain, April is a good month to visit Dubrovnik as long as you plan it right. Make sure there are no (local) public holidays, school vacations in large European countries or cruise ships arriving.

Weather wise, things are getting much better in May. The average temperature improves by the week and rain becomes less likely. Unfortunately, other tourists and cruise lines know this as well. Cruise ship arrivals are picking up massively while school vacations might make it busy in the beginning of the month. Research becomes key! Use our daily crowd predictor to see when it’s busy in Dubrovnik.

June is the last month before peak season truly kicks off. Speaking of crowds, there are some days that will be very bad and some days that might be OK(ish). It is essential to plan your stay in Dubrovnik beforehand. For example, June 27 will be the busiest cruise day of the month with over 8,5000 cruise passengers arriving in the city. Other days will see no cruise ship arrivals. You can read more about cruise ship arrivals in June here. On a more positive note, the weather will be great!

Peak season! If you can visit Dubrovnik during another month (except August), we would advise you to avoid Dubrovnik. Not only will large cruise ships arrive in the city almost each day, most European countries, including Croatia, will have school vacations. That means that the majority of Europeans that normally cannot travel, will be able to do so now. If you still want to visit Dubrovnik plan your visit on days when no or only some cruise passengers arrive. Weather wise, you are good with an average temperature of 24.6 degrees Celsius (76.3 degrees Fahrenheit).

August is Europe’s busiest travel month. Peak season peaks in August. Especially in the beginning of the month we would advise to avoid Dubrovnik if you can. Basically, every European country will have school vacations. In addition to that, cruise ships will continuously arrive in the city. Meanwhile, the weather will be dry and hot.

Although most kids are back in school, September can still be relatively busy. Especially in the beginning of the month, the streets of Dubrovnik can still be crowded. Throughout the month, things will start to quiet down and it can be a good month to travel. Temperatures are still good, and it will not rain too much. Smartest thing to do is to closely watch the port of Dubrovnik’s cruise schedule. On some days it can still be very busy. For example on September 26 when almost 10,000 passengers will arrive in town.

In October, European travel is slowing down quickly. The weather can still be good in Dubrovnik but you can also be unlucky with lots of rain. In addition, cruise ships will still know how to navigate to King’s Landing Dubrovnik. If you are planning a visit in October we advise you to check our daily crowd forecast as well as the weather forecast. Also keep an eye on European autumn school vacations. Especially in big countries such as Germany, Italy or France.

Just behind January, this is Europe’s slowest month in terms of travel. Especially for destinations situated at the Adriatic Sea, there will not be so many tourists. Unfortunately, that is also because the weather is deteriorating quickly. If you don’t mind rain and cold, this is your month!

Although tourism picks up slightly on the continent, Dubrovnik is not your typical Christmas destination. The weather might be horrible, but you will not bump into massive cruise crowds.