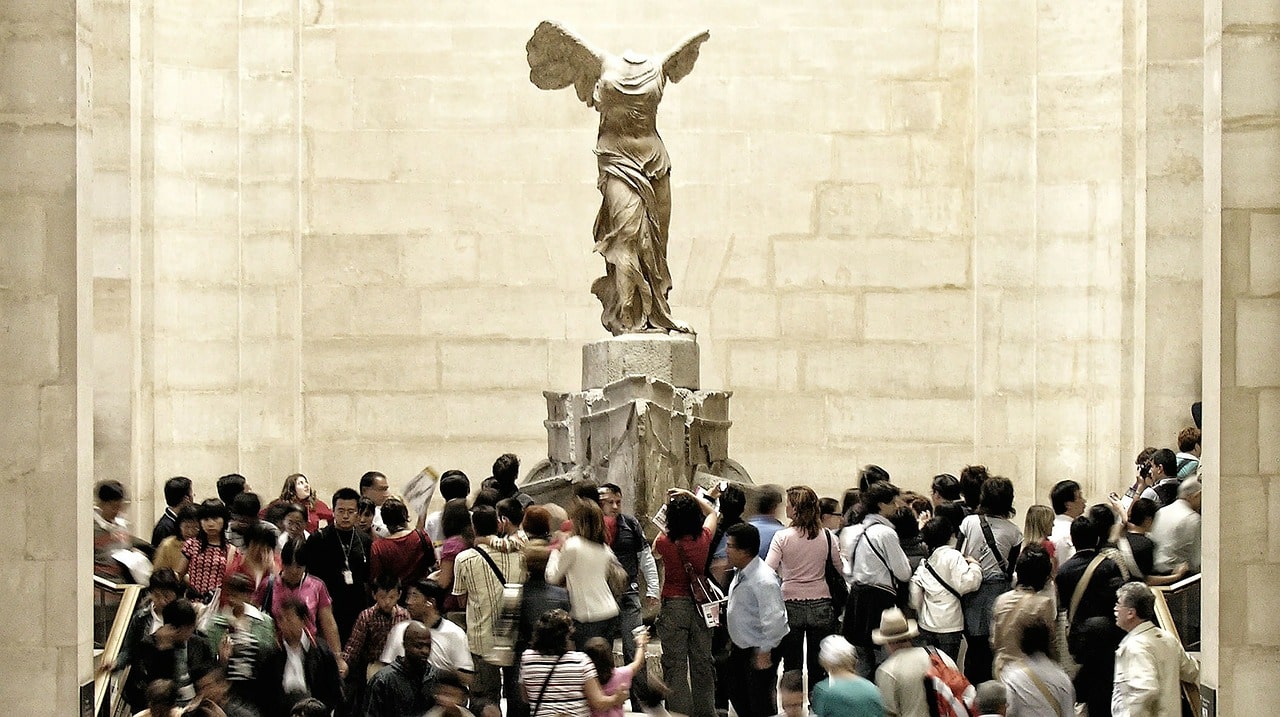 It has been a busy week. News about overtourism and the side effects of mass tourism reached an ultimate high with a traffic jam on Mount Everest resulting in the death of several climbers. Meanwhile, one of the world’s most famous living, but yet unidentified artists visited Venice. Banksy set-up a cruise ship composition to make a statement against overtourism.

Meanwhile, museum staff and cities are fighting against overtourism. In China, the government introduced a cap on the number of visitors walking the Great Wall of China. Meanwhile, staff of the Louvre museum are protesting against working conditions now the museum is getting too crowded. It was a busy week and here are some of the highlights.

Numerous news outlets, including BBC, report that Banksy has been showing new artwork in Venice. Banksy set-up a stall in Venice during the city’s annual art show Biennale. Titled ‘Venice in Oil’ the artists highlights the city’s ongoing struggle with cruise ships. Something we recently wrote about Venice ongoing struggle and highlighted that scheduling is Venice problem number one.

Venice in Oil by Banksy displays a ‘large ship floating in the city’s Grand Canal surrounded by men on gondolas’, BBC writes. Banksy published a video on Instagram in which you the buildup of the stall and how he is eventually forced to leave by local police officers.

. Setting out my stall at the Venice Biennale. Despite being the largest and most prestigious art event in the world, for some reason I’ve never been invited.

One of the most shocking news stories of the week came from Mount Everest. Dubbed a ‘deadly traffic jam’ by CNN and a ‘zoo’ by the New York Times, the highest mountain on earth has become the latest example of overtourism. With too many climbers trying to reach the summit, long lines of climbers were waiting for their chance to stand on top of the mountain. This traffic jam has taken a hefty toll as multiple climbers died as a result.

The New York Times interviews an American climber, Ed Dohring, who ‘summited a few days ago [and] was shocked by what he saw’. Dohring explains to the American newspaper that ‘climbers were pushing and shoving to take selfies’ while he had to ‘wait hours in a line, chest to chest’.

CNN reports that one of the most overcrowded parts of the Chinese Wall, the Badaling Section near Beijing, will be closed if it gets too busy. Authorities in Badaling have announced to introduce a daily cap of 65,000 visitors. The quota will go into effect on June 1 when a new online ticketing system and crowd warning system will be introduced as well. CNN adds that “other Chinese destinations like the Three Gorges Dam and Beijing’s Palace Museum have also adopted these guidelines and implemented visitor limits”.

Numerous media outlets, including FoxNews.com, report that staff at the famous Parisian Louvre museum went on a strike on May 28. The museum shut its doors as employees protest against overcrowding of the museum. Thousands of tourists ‘were left outside’, Fox writes. According to the labor union, “the Louvre is suffocating [..] “While the public has increased by more than 20 percent since 2009, the palace has not grown. … Today the situation is untenable.”

AP explains how to behave in the age of overtourism

Associated Press publishes ‘4 ways to be a good traveler in the age of overtourism’. Citing most of the above incidents, including the Louvre closing and the Mount Everest accidents, the newswire gives its readers tips on how to travel the right way. The first tip from AP is to ‘remember, it’s not all about you’ explaining that you should adopt to local culture.

The second tip is to take think about the pictures you take. Don’t put yourself or others at risk and respect boundaries is the main message. The third tip is to give back. According to AP, the best way to do this is ‘to consider spending money in the local economy rather than at international hotel chains’. AP’s last tip is to ‘say hello’ and learn a few words in the local language.

You can find our tips on what to do to minimise our impact on overtourism here.

A Guide to Public Holidays and School Vacations in Belgium