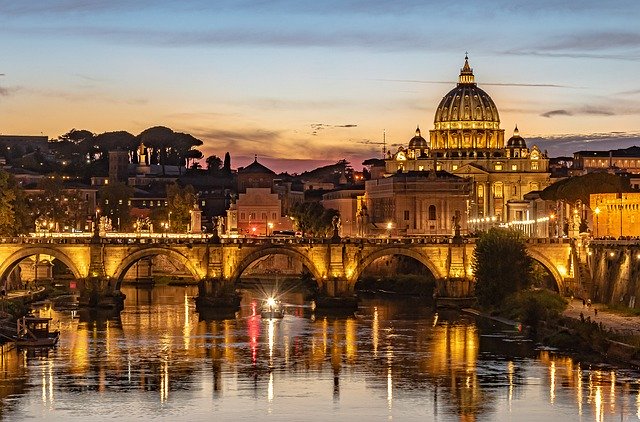 Before COVID-19 hit Italy hard, the country attracted over 60 million international tourists per year. These 60 million visitors make Italy the world’s fifth most visited country. Italy can get crowded, especially in the more popular cities and coastal areas. Although we cannot predict how and when travel picks up again after the coronavirus, we combine all our data in this handy month by month overview that gives you the best time to travel to Italy in 2021.

Before we start predicting crowds and analyzing weather, it is important to understand that Italy is an incredibly diverse country. While it is busy all year long in Florence and Rome, it gets very quiet in the Alps in Spring and Autumn. The best month to travel totally depends on where you are going. Nevertheless there are some trends that hold true for the entire country. In general, Italy is more crowded when the sun shines. This means that summers are warmer, but also more crowded than winter months. The great exception are of course the Northern Alpine regions, where winter weather attracts Italians and other Europeans to the mountain ski resorts.

Because Italy is a very large and diverse country, it is impossible to provide a single overview for the entire country. We therefore split Italy up in three distinctive regions. The North, which includes popular destinations such as Venice, Milan and the Italian Alps. Central Italy includes Rome as well as Tuscany and southern Italy which includes everything south from Naples. We group the coastal areas and the islands Sicily and Sardinia in Italy’s south as they have very similar tourism trends.

Overall, we believe the best time to travel to Italy in 2021 is spring: you get great weather without the craziness of peak season and on top of that, flowers are blooming which brings a fantastic vibe to the countryside. To visit the larger touristic cities like Rome, Florence or Venice, we advise all tourists to travel just before or after the traditional peak season:

April to May or mid-September to early October. During these months the weather is still good and the cities are less crowded than during the infamous peak season.

January is the slowest travel month in Italy

January is a slow travel month with Italy’s characteristic winter weather. That is great for those seeking a winter sport vacation, but it is ‘not so great’ for basically any other tourist activity. Winter storms can cause problems in the entire country. There are some upsides to this month though: there are fewer tourists and prices for hotel rooms and travel costs are much lower than during the rest of the year. Average maximum temperatures are between 7 degrees Celsius (45 Fahrenheit) in Milan (North) and 12 degrees Celsius (53 Fahrenheit) in Sicily (South).

February in Italy can be cold

Similar to January, February is a slow travel month. There are some school vacations in northern parts of Europe, giving lots of people the possibility to take a winter sports vacation or a city trip. This makes February slightly busier than January. Despite this small increase of people, it remains quiet in most parts of Italy. Only ski areas and larger cities such as Rome are affected. Meanwhile, carnival brings massive crowds to Venice, while Fashion week makes Milan a buzzing city as well. Average maximum temperatures are around 12 degrees Celsius (54 Fahrenheit) in the entire country.

Northern Italy: Great for skiing while school vacations and carnival bring large crowds to some areas.

March in Italy can be cold but there are fewer tourists

In March the weather starts to rapidly improve across the country. More sunshine, less rainy days and rising average temperatures make Italy an attractive tourist destination. Meanwhile, also the tourist season starts to pick up slowly in March. Average temperatures are around 17 degrees Celsius (63 Fahrenheit) all throughout Italy. For winter sports, March is the last good month for snow.

April is a good month to visit Italy

With average temperatures of 20 degrees Celsius (68 Fahrenheit) in the south and 19 degrees Celsius (66 Fahrenheit) in the North, April is a fantastic month to visit Italy. Weather is now improving every week and because cruise ships start to relocate from the Caribbean to the Mediterranean, Italian ports can get extremely crowded on certain days. School vacations and public holidays, like Easter, can make cities like Rome very busy. Except for Northern Italy, April is also a dry month with only a few rainy days.

Northern Italy: rain can be a factor and it can be busy around school vacations and public holidays. Overall a slow month.

Southern Italy: season slowly starts to pick up in southern areas. Overall still small crowds while the weather can be great!

May can be busy in Italy

May in Europe means lots of school vacations and public holidays. There is an increase in domestic tourism while international arrivals are making larger cities busier. Cruise tourism is now also picking up in destinations like Venice, Naples and Rome. If you travel to Italy in May, make sure you avoid the busy weekends around religious holidays such as Whit Monday or Ascension Day. During these weekends almost the entire continent has a few extra days off. Average maximum temperatures are between 20 degrees Celsius (68 Fahrenheit) in Rome and 24 degrees Celsius (75 Fahrenheit) in Milan.

Central Italy: very busy during the religious holiday but relatively quiet outside these busier weekends.

June is a great month to visit Italy

June is one of our favorite months to travel through Europe. Summer weather brings the best of Italy to life while the biggest tourist crowds will come later in the summer: in July or August. Usually, the first half of June is less crowded than the second half. Good to know is that some days are better than others. Peaks in tourist crowds are caused by public holidays, cruise ship arrivals and local events. Use our daily crowd predictions to check what days are good in Venice, Rome, Naples, Milan, Bari, Capri, Florence, Cinque Terre or Pisa. Average maximum temperatures are high across the country: 29 degrees Celsius (84 Fahrenheit) in Rome.

Northern Italy: Good month to travel with great weather while the biggest crowds will come in July and August.

Central Italy: Great weather while the crazy crowds are not (yet) there.

Southern Italy: Great weather while the crazy crowds are not (yet) there.

July is a busy month to travel to Italy

July is a very busy month in Italy. The weather might be great, but it is also one of the two busiest months of the year. Except massive crowds in Italy’s most popular destinations. If you are traveling to Italy in July, avoid weekends and plan ahead. We recommend discovering alternatives to the most popular tourist destinations. The average maximum temperature in Rome in July is 32 degrees Celsius (90 Fahrenheit).

Peak season in Italy peaks in August. It is the busiest month of the year. We recommend avoiding Italy’s most popular tourist destinations in August. Destinations like Venice or Rome become incredibly busy especially when there are lots of cruise ships in port. If you are traveling to Italy in August, we recommend traveling to lesser known destinations. When you have no choice, plan ahead and buy skip-the-line tickets or timed entry tickets to the most popular tourist destinations. Weather conditions across the country are good with average temperatures of 30 degrees Celsius (86 Fahrenheit) in Rome.

September in Italy is a good month to travel

September used to be the perfect post season month to travel to Italy. September brings good weather and fewer crowds to the country. Although this is still the case for more rural areas, this is no longer the case for bigger cities like Rome or Venice. The peak season has now extended into the beginning of September and popular destinations are best to be avoided. Meanwhile, outside the cities in areas like Tuscany, things have slowed down. Average maximum temperatures are similar in the entire country: 24 degrees Celsius (76 Fahrenheit).

Central Italy: It is still busy early in September. The weather is good although the first Autumn rain showers will start to hit central Italy.

Southern Italy: Smaller crowds than August with good weather. Busy on some days.

October is becoming the best month to travel to Italy

October has become one of our favorite months to travel to Italy. Global climate change is warming up the earth. As a result: summers are extended into early October. With good weather (not too warm, not cold at all), we now see October as the ideal post season month to travel. Crowds will be low with great hotel prices and flight fares. The average temperature in October will be around 21 degrees Celsius (69 Fahrenheit).

November is low season in Italy

November marks the start of the Autumn and winter season in Italy. The weather becomes highly unpredictable with occasional autumn storms and serious rainfall. This can result in the infamous floods in Venice (Acqua Alto) and problems elsewhere in the country. It is also one of the slowest travel months of the year with low hotel prices and economic flight fares. Average maximum temperatures drop to 12 degrees Celsius (54 Fahrenheit) in the north and 17 degrees Celsius (62 Fahrenheit) in the south.

December is busy around Christmas

December weather in Italy can be bad. For the south and central part of the country, it is the wettest month of the year. Average maximum temperatures in December vary between 7 degrees Celsius (45 Fahrenheit) in the North to 13 degrees Celsius (56 Fahrenheit) in the south. Despite these adverse weather conditions, it will be slightly busier than November. Tourism in Europe picks up around the Christmas holidays. The winter sports season in the Alps starts half December. Expect large crowds in Rome around Christmas.

What is the best time to travel to Greece in 2020?