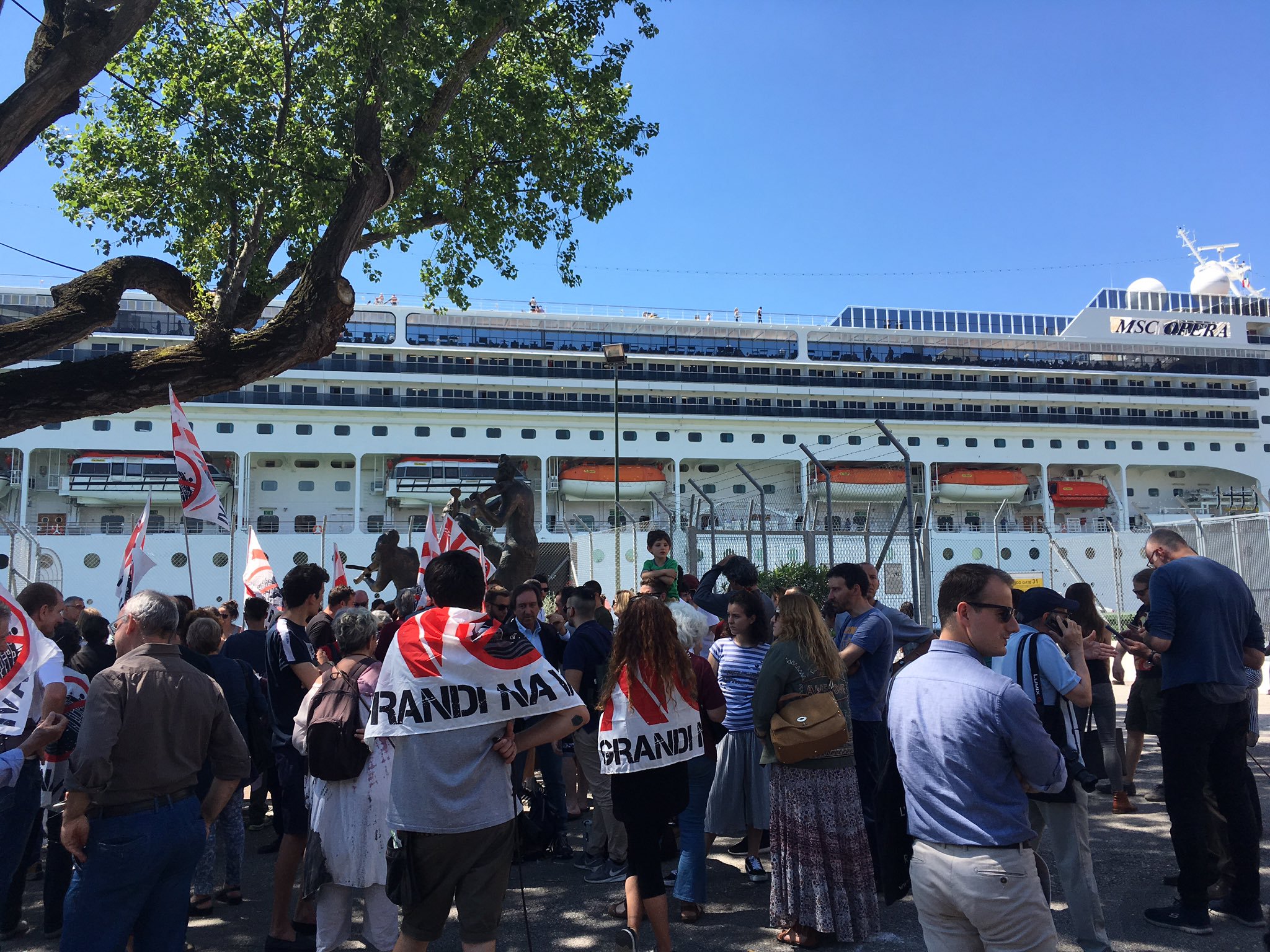 Last Sunday morning the cruise ship MSC Opera was involved in an accident in Venice. MSC Opera was beyond anyone’s control after a cable between the cruise ship and a tug boat allegedly broke. The out of control ship crashed into a docked river cruise ship and wharf leaving five injured tourists behind. News.co.au published an extensive recap of the incident arguing that the incident was caused by a problem in MSC Opera’s engine and not by a snapped cable.

Videos of the incident quickly spread through social media sparking immediate protests in a city where cruise ships are already a controversial topic. With the busiest cruise day of the year coming up on June 9, public outrage in Venice will intensify this weekend with protest on Saturday.

#BREAKING At least five people were injured after the MSC Opera cruise ship collided at the San Basilio pier in #Venice with a small boat, La Repubblica reports. pic.twitter.com/ATyAoOOiSa

Nothing about the incident can be found on MSC’s corporate website (check June 4) or social media handles. However, Cruise4News.at reports that MSC Opera has been forced to stay in Venice for further investigations and to undergo necessary repairs. MSC Cruises had to cancel the planned cruise as a result. Guests have been offered the choise between staying onboard or to be fully refunded. MSC Opera will now leave Venice on Friday June 7, according to the website. The ship will return on June 9, for Venice busiest cruise day of the year.

Over the last decades Venice’s decreasing population has been witness to increasing numbers of (large) cruise ships arriving in the city. Ranking 9thin our overview of Europe’s busiest cruise destination, the Italian city receives slightly over 1 million passengers in 2019. Although this number is much lower than cities like Barcelona, Marseille or Naples, problems in Venice are worse then elsewhere.

Venice is struggling with properly spreading cruise arrivals over the days of the week. The majority of cruise ships arrivals in Venice are planned during weekends when the city is already extra busy with tourists on short breaks. In fact, if we only look at weekend cruise ship arrivals, Venice is the busiest port of Europe!

Years of protests against cruise ships in Venice

PR wise, the MSC Opera accident arguably happened in the worst possible place for MSC Cruise Lines and the entire cruise industry. Over the past years, citizens of Venice have protested against large cruise ships entering the city multiple times. Concerned with the safety, environment and liability of the city, many Venetians want a ban on cruise ship arrivals.

In 2016, demonstrators blocked the entry of cruise ships. A similar protest took place in 2013 when Venetians in wetsuits went for a swim in the Giudecca canal, Telegraph.co.uk wrote in the past. A week before the MSC Opera incident, the topic attracted international attention as the famous street artist Banksy, set-up a stall in Venice. With an artwork ‘Venice in Oil’ the artists protested against cruise ships in the city. His Instagram video reached media outlets all over the world, putting the topic on the agenda, days before the incident.

In the past, protests led to a ban of ships of over 55,000 gross tonnage in 2017. Protests and stricter rules on cruise ship movements have led to lower numbers of cruise ship passengers arriving in the city. Back in 2016, Telegraph.co.uk reported that on a single day about 30,000 passengers would disembark.

Meanwhile, passenger numbers disembarking in Venice on a single day have dropped considerably since 2016. The crazy high number of 30,000 passengers per day, mentioned by The Telegraph in 2016, stands in stark contrast with this year’s peak day. Although it’s still a big number of passengers, it is much lower than before. On Venice’s busiest day of the year a total of 18,903 passengers (max) will disembark from seven large ships. One of these seven ships includes a new arrival and departure for the now stranded MSC Opera.

Although the maximum numbers of passengers now disembarking in Venice is much lower, the city still faces issues with cruise ships. The MSC Opera incident immediately sparked protests. Local protestors are no longer asking for limitations but are calling for a full ban of cruise ships, TheLocal.it writes. Local organization No Grandi Navi, which translates in ‘No big ships’ immediately started protesting at the scene of the incident.

CBSNews.com reported that the MSC Opera incident ‘re-ignited the controversy over these ships, which activists say are simply too big for this fragile city. Many Venetians are saying “enough is enough,” and that the accident was a “wake-up call.” CBS interviews Jane Da Mosto who leads a local action group We Are Venice. According to Da Mosta, “These cruise ships bring a huge, huge number of people concentrated into the city, and they’ve acted like kind of the icebreaker for the destruction of Venice through mass tourism”.

The accident with the MSC Opera cruise ship took place on Sunday June 2. Exactly one week before Venice’s busiest cruise day of the year. On Sunday June 9, seven large cruise ships will set sail to Venice. The MSC Opera will be laying in its port to welcome the other ships which includes the slightly larger MSC Magnifica which is operated by the same cruise line.

Within a week after the incident, Venice will be facing it’s busiest day of the year. As the embedded tweet below shows, trotests have been announced for coming weekend. It is easy to conclude that after the MSC Opera incident, cruise lines are facing even more negative sentiment in one of Europe’s most popular cruise destinations. The MSC Opera incident is likely to become an example of overtourism.

How to avoid crowds on busy days in Venice in 2020