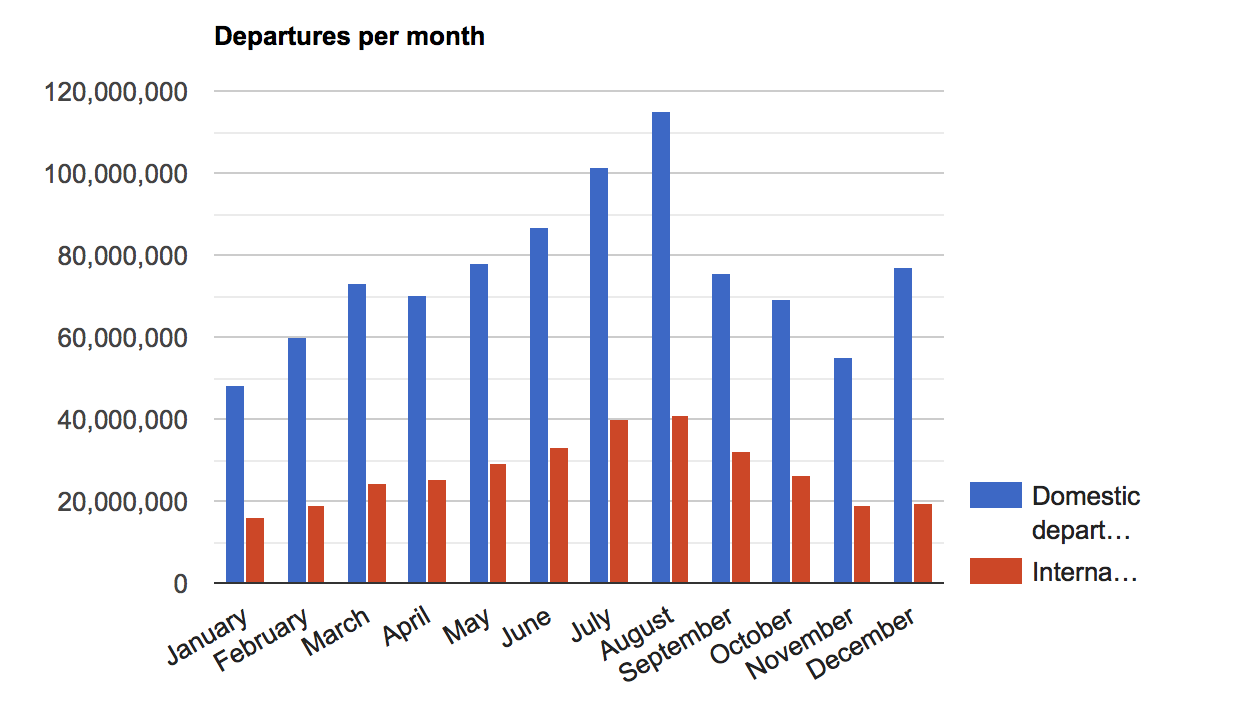 European tourism peaks in the summer. Most tourists will use their summer school vacations and the good weather to go out and explore. Meanwhile, the winter season and snow result in large crowds to hit the slopes of the Alps.

The chart, based on Eurostat’s tourism data, below shows you two distinctive types of tourism. The blue bars show you when European tourists travel within their own countries. Traveling within your own country is known as domestic tourism and is the biggest contributor to crowds in Europe and in fact also in most other countries in the world.

As shown in the chart, August is clearly the busiest month of the year and is closely followed by July. This is a result of almost all countries having school holidays. Especially at the end of July and during the beginning of August, all children on the European continent will have vacation. During these weeks, people usually enjoy family holidays and Europe can get extremely busy. If you want to avoid being stuck in traffic jams of national tourists, it is best to watch our for local school vacation and national public holidays.

International tourism, or Europeans that cross their national border for a vacation, is more spread over the year. Meanwhile, it’s impact on life in Europe’s hot spots is big but smaller than domestic tourism. For the same reason why domestic tourism peaks in August, school vacations, international tourism is also influenced by school schedules. Meanwhile, border crossing trips usually last longer.

Ignoring weather and only looking at travel trends, there is a clear peak season (June to August) but no clear shoulder season. Crowds are immediately smaller in September and are getting smaller until the next high season starts: Christmas season. Travel crowds hit rock bottom in November. If you are lucky with the weather, November is arguably the best month to travel. Otherwise, spring is a good time to travel. The closer you get to peak season the busier it gets. By avoiding the Eastern break, March until June are good months to travel but is important to watch our for local festivals, public holidays and other events attracting big crowds to Europe’s favourite hotspots.

The data used for this post is based on Eurostat and can be accessed here: https://ec.europa.eu/eurostat/web/tourism/data/database