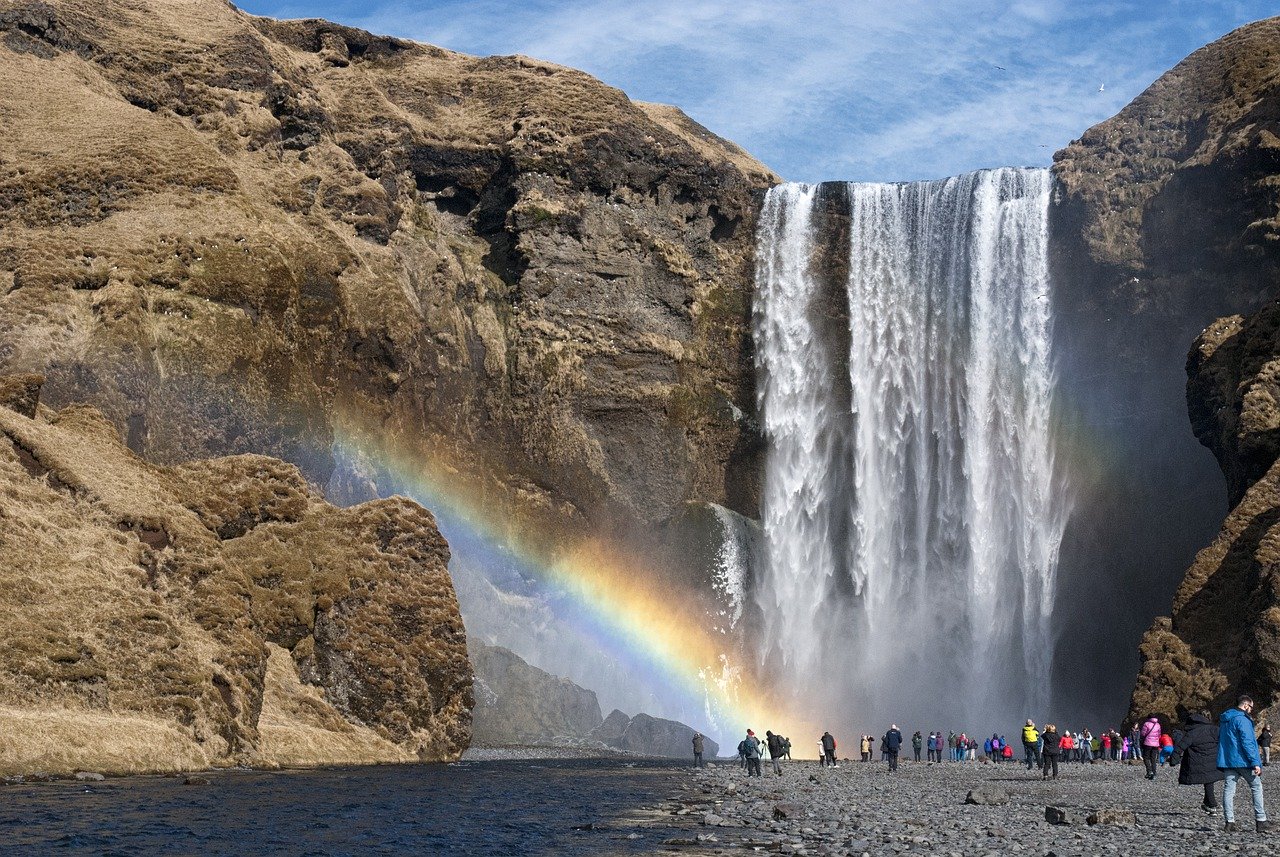 Back in 2017, the total number of arriving tourists in Iceland exceeded 2 million for the first time. Although that might be a small number compared to France (89 million) or Spain (83 million), that number is surprisingly high when you consider that Iceland has a population of just 364,000. That makes Iceland less populated than the state of Wyoming (579k), the US least populated state. Iceland is also considerably lower populated than Malta (475k), the EUs smallest regular member state. We crunched all data, including climate data, to analyze the best time to visit Iceland.

The impact of tourism on the Island country is without no surprise ‘huge’. Iceland has seen steady rises in total number of tourists arriving but also made headlines related to overtourism over the last years. Especially the South and Western part of the country have become increasingly popular. Games of Thrones and Justin Bieber made the island even more popular in recent year resulting in quickly increasing crowds of tourists. The Fjadrárgljúfur Canyon is beautiful by itself but has seen an unsustainable surge in visitors since it was a Games of Thrones filming location.

Covid-19 might have brought an halt to tourism in Iceland in 2020, but the country has already opened its borders for tourists. Tourists coming from ‘safe countries’ are allowed back in. After the coronavirus crisis is over, we should expect that tourism in Iceland to bounce back quickly.

Assuming things return to normal in 2021 and beyond, the best time to visit Iceland is during the summer months: June to early September. During the summer, due to its northern location, visitors to Iceland can expect very long days and even experience the midnight sun when the sun never truly sets. During summer, Iceland is open for all kinds of tourism: you can hike, bike and freely drive through the country.

Outside the summer, you can still travel to Iceland. For example to experience the Northern Lights which can be observed in winter. Unfortunately the winter has a major downside: the weather. The adverse weather conditions don’t allow for much other activities than watching the northern lights. The average number of nights spent in the country also increases in summer as the average tourist spends more than 8 nights in the country, according to statistics by Iceland’s tourism board.

Best to time to visit Iceland to see the Northern Lights

The Northern Lights occur all year but can be seen best from September to April. You can see the lights if you are lucky. There are no guarantees that you can see the earths wonder on every trip to Iceland. You need the right weather conditions: a sky that is dark enough and a bit of luck. Aurora Borealis is most active in March or September.

In 2021, it is unlikely that Iceland will be as busy as during the last years due toe the coronavirus crisis. We don’t expect any month to be extremely crowded in the years to come. However, we always believe it is good to avoid traveling in August. August is the world’s busiest month as school vacations in both Europe and the United States allows people to travel. Data from Iceland’s tourism board show that July is even slightly busier than August.

Although Iceland lies just outside the Artic Circle, there is a reason Iceland is named after frozen water. The long nordic winter brings extremely cold and icy weather to Iceland. Expect low crowds when you travel to Iceland in January. But also expect most of Iceland’s tourism industry to be closed. The average maximum temperature in Reykjavik is 3 degrees Celsius (37 Fahrenheit) in January.

February is much of the same as in January. Most of Iceland will be hibernating. Tourist attractions and outdoor activities are closed for winter. There will be no crowds to avoid. Similar to January, it is cold in Reykjavik in February. The average maximum temperature is just 3 degrees Celsius( 37 Fahrenheit).

From March onwards, most of the snow and ice will start to melt. Tourism will also slowly wake up from winter hibernation. But with slowly we mean really slow. Most tourist attractions will not be open in March. March is still cold in Reykjavik with an average maximum temperature of just 4 degrees Celsius (39 Fahrenheit). It is also one of the wettest month of the year with precipitation on 14 days.

April is the first full spring month in the Northern Hemisphere. Days in Iceland will be getting longer and longer. But most tourists will still stay clear from the island nation. The tourism industry will slowly start to get going again. With 6 degrees Celsius (43 Fahrenheit), April is still a relatively cold month in Reykjavik.The temperature does improve as the month progresses.

May will be the first month of the year that will allow tourists to make full use of what Iceland has to offer. Having said that, you still need to do your homework. If you plan on traveling by bus, make sure that you research the bus routes and schedules. Not everything will have opened. Crowds will remain low but you will come across fellow tourists that you will not see that often during the cold and icy winter months. Days will be long as daylight extends well into the country’s evenings and nights. With an average maximum temperature of 10 degrees Celsius (50 Fahrenheit), May brings quickly improving weather to Reykjavik.

June is a good month to visit Iceland

Iceland’s peak season starts in June and lasts until the end of August. June brings Iceland’s longest days as the sun does not completely set during some of June’s long days. June is a popular month for trekking and exploring. It is also the best time to spot whales while the weather is at its best with a low chance of storms. With 12 degrees Celsius (54 Fahrenheit) in Reykjavik and only 9 days of rain, June is one of the best months to visit Iceland.

July is peak season in Iceland

Similar to July, June is peak season in Iceland. Although it never gets really warm so close to the Artic circle, you can expect good weather. At least the best weather the country of ice has to offer. For whale spotting and other summer activities, on or and off the water, July is the perfect month to visit Iceland. July is slightly busier than other months as schools on the European continent as well as in the United States will be out for summer. Families that usually are not able to travel will be able to travel in July.

July is also the month that brings the best weather to Iceland. In Reykjavik the average maximum temperature rises to 14 degrees Celsius (57 Fahrenheit) while it only rains on 9 days. The least number of wet days compared to any other month.

August is probably Iceland’s second busiest month. August is the world’s busiest travel month and that effect can even be felt in Iceland. Although it is slightly less busy than July, you should expect big crowds at Iceland’s most famous sights. August weather is slightly wetter (11 days of rain) than July but the temperature remains a solid 14 degrees Celsius (57 Fahrenheit) maximum on average.

September is a good month to visit Iceland

September is a perfect month to visit Iceland. Peak season ends in August and this is reflected in a serious drop in the number of tourists visiting the country. Meanwhile, the weather can still be good, especially at the beginning of the month. Another perk is that if you are lucky with the weather you can even see the Northern Lights which are especially active during September. With an average maximum temperature of 11 degrees Celsius (52 Fahrenheit), September is the last month that brings acceptable weather to Iceland.

October is not a great month to visit Iceland. It gets wetter, colder and even icy as winter sets in. The average maximum temperature in Reykjavik in October drops to 7 degrees Celsius (45 Fahrenheit) while it rains on about 13 days.

November is not a great month to visit Iceland either. Winter truly takes a colder turn as we move towards the end of the year. The average temperature in Reykjavik will be about 4 degrees Celsius (39 Fahrenheit).

Unlike most other destinations across the world, Iceland is not a popular destination for Christmas breaks. The weather is too adverse for an enjoyable trip. December is a wet and cold month. It will rain or snow on 14 days while the average temperature in Reykjavik will drop to 3 degrees Celsius (37 Fahrenheit).

Travelers willing to pay an extra 1,000 USD to avoid crowds